"Duesy or Doosey" - The Duesenberg

If you liked the car pictures, take a look at the history of the amazing Duesenbergs. 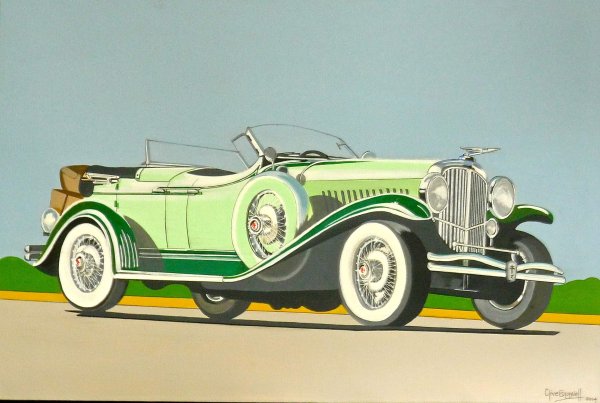 Despite it's relatively short lifespan, the classic car of the 1930s that combined luxury, style, the precision of a Rolls-Royce and the amazing acceleration and blinding speed of a Bugatti, was the Duesenberg.

Because of its amazing attributes the phrase “it's a doozy”, emerged in the 1930s to describe something that had the best of everything.

The Duesenberg Automobile Motor company was founded in 1913 by the German born Duesenberg brothers Fred and August, in Demoines, Iowa, in the United States. Their beautiful motorcars were built entirely by hand.

The two brothers were self- taught engineers and although they didn't design their cars to be racing machines, a Duesenberg set a land speed record of 156 mph at Dayton in 1920. In 1921 the first American to win the French Grand Prix did so in a Duesenberg and until 1960 it was still the only American car to win a European Grand Prix winning in 1924, 1925 and 1927.

The Duesenberg company went bankrupt and closed in 1922. In 1925 the owner of Cord Automobile bought the company to secure the Duesenberg brothers’ engineering skills and the brand name in order to produce luxury cars. He challenged Fred Duesenberg to design an automobile that would be the best in the world.

Following the introduction of the “Model J”, (featured in my paintings) which debuted at the New York Car Show of 1928, the Duesenberg quickly became one of the most famous cars in America and was owned by the rich and famous - Clark Gable, the Duke of Windsor, Al Capone, Greta Garbo, May West, Prince Nicholas of Romania and King Alphonso of Spain, to name but a few.

The Duesenberg advertised itself as the best car in the world without much opposition, but unfortunately had to cease production in 1937 after the Cord financial empire collapsed. Of the 480 “J” models produced 384 are still around. A Duesenberg “J” convertible coupe sold for $4.5 million in March 2013.

Producing the images (“His and Hers”), of these lovely historic motorcars has given me great pleasure.